Britain From A to Z: T

As I have already discussed, there are a number of words that are different in Britain than in the US even though we basically speak the same language. So, you might expect the same type of differences when it comes to traffic signs. And you would be correct.

Here are a few examples: 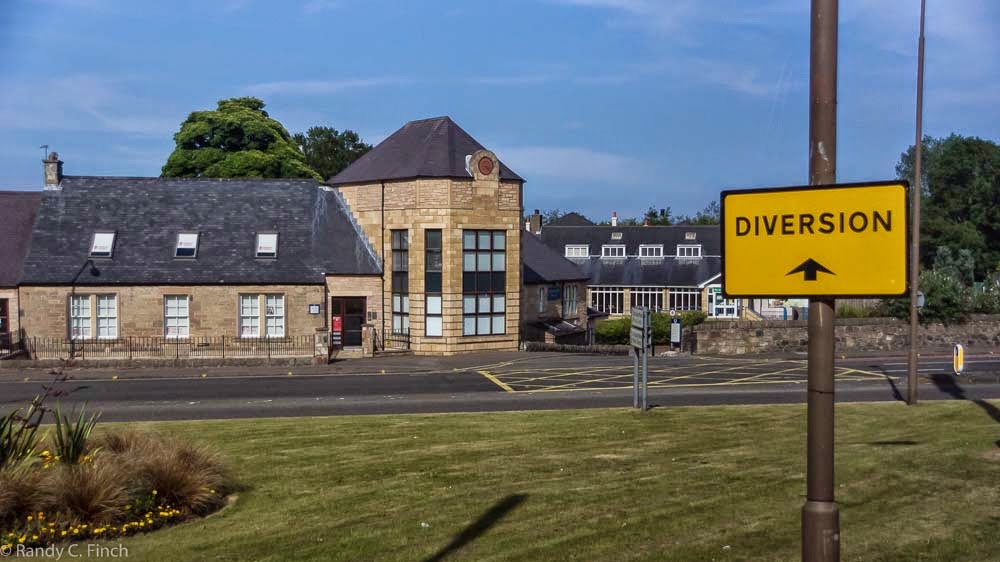 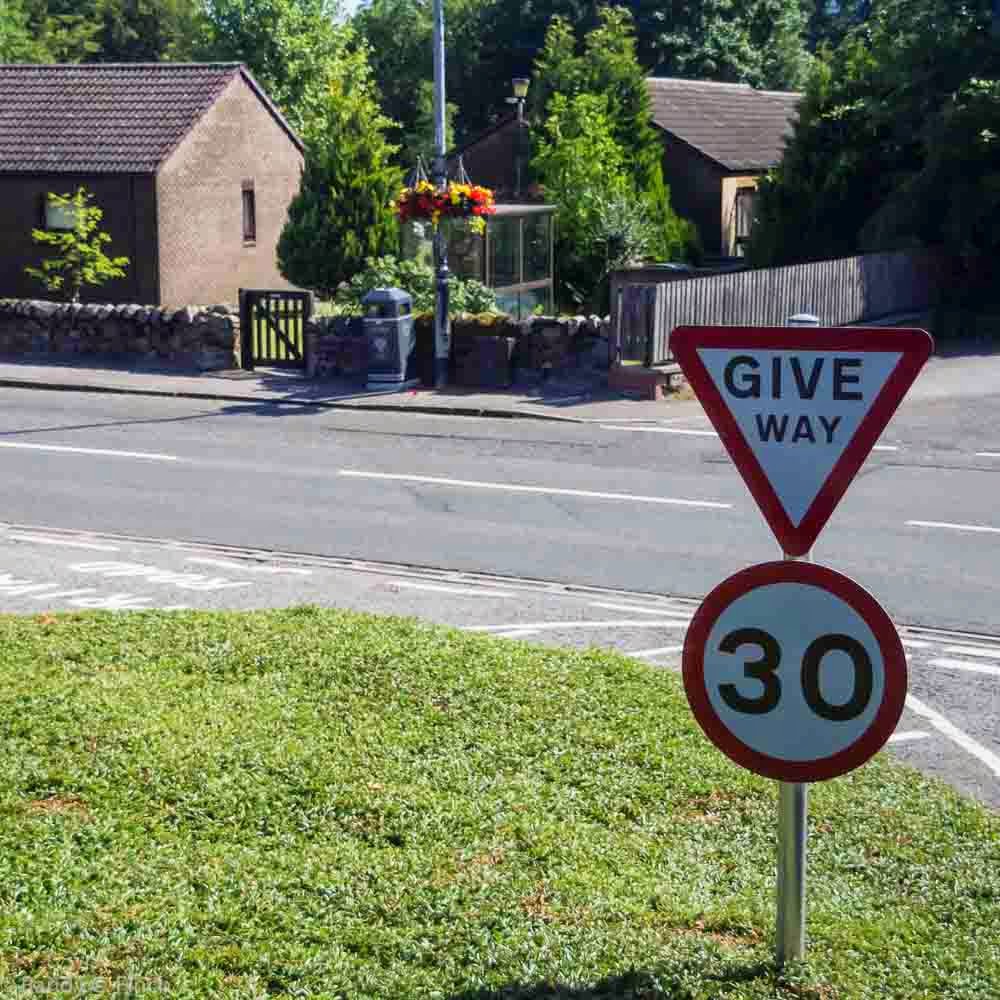 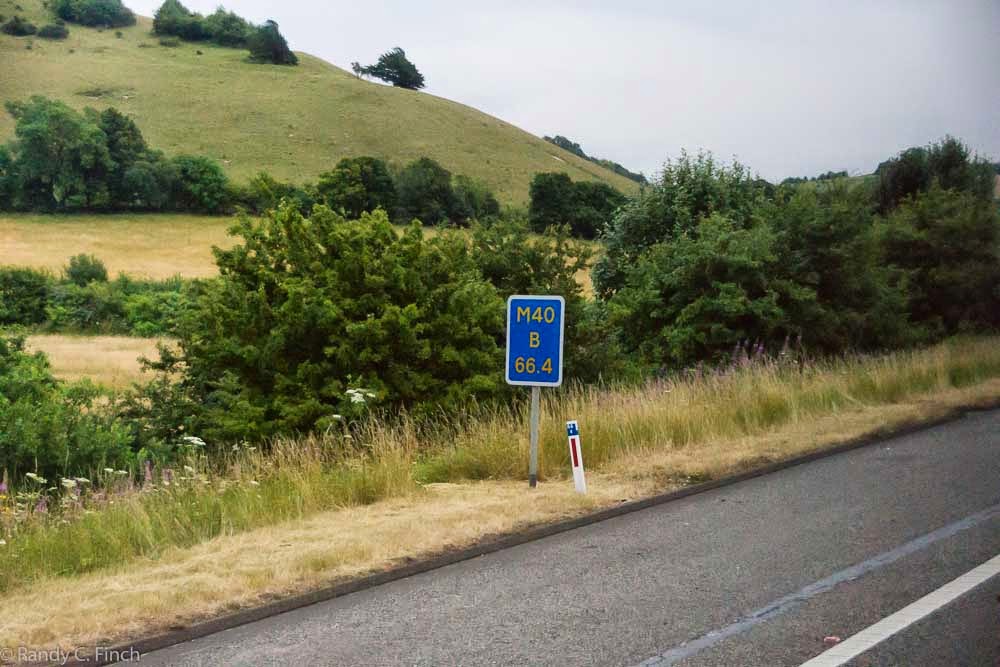 Notice in the photo above that the road number is M40. M is used to designate main carriageways; what we call interstate highways in the US. Lesser roads are designated with an A or a B as seen in the photo below. 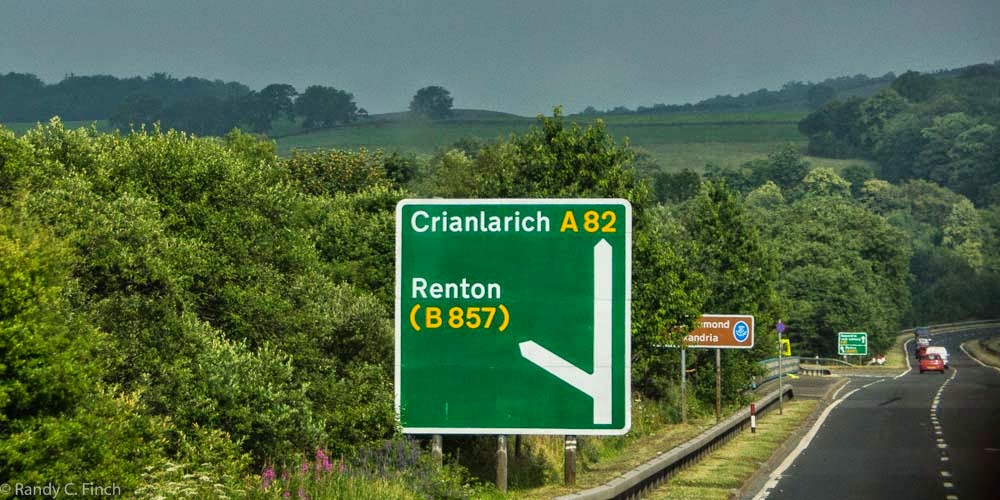 Also notice on the M40 sign above that there is a tenth mile designation. The small white post is also marked with a 66.4. These small tenth mile white posts could usually be seen every tenth mile on the M highways. Here in the US, our highways, including interstates, typically only have mile markers.

Although there are places in the US that have roundabouts, Britain seems to be full of them. Therefore, signs like the one on the right in the photo below are quite common. It shows the circle of the roundabout along with where you will be headed along each leg shooting off from it. 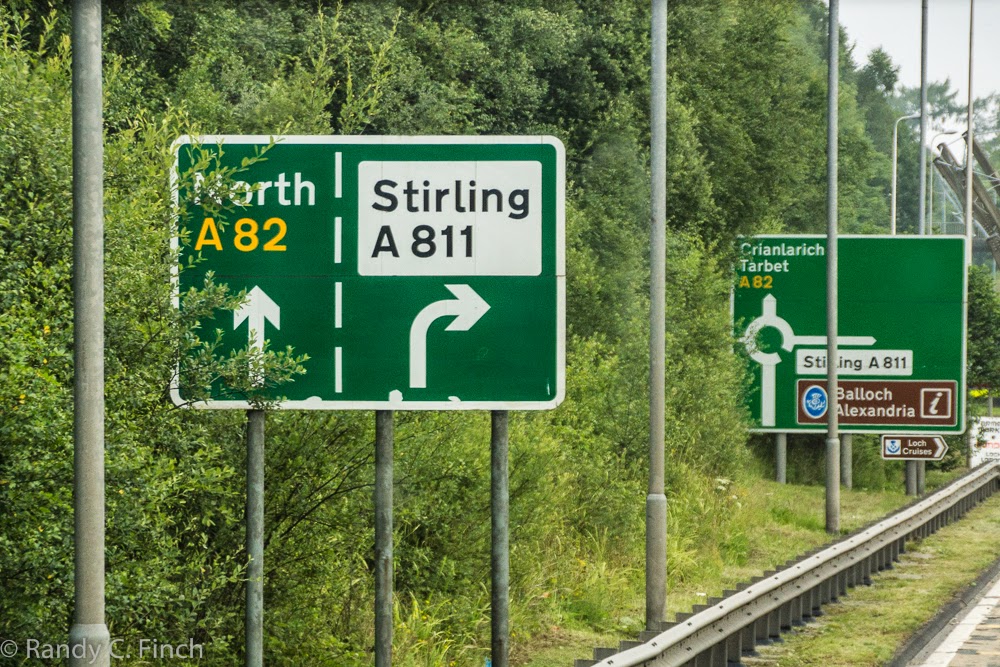 On some of the larger multi-lane roundabouts painted instructions appear on the pavement itself.

A useful feature along some sections of the M highways was the chevrons. There would be a sign instructing drivers to keep 2 chevrons apart. On the road would be painted chevrons. If you kept at least two chevrons back from the car in front of you and you were driving the speed limit, you would know you were a safe distance away in case of an emergency stop. This is much easier than trying to determine if you are one car length per 10 miles per hour of driving speed. However, you can see in the second photo below that not everyone obeys the two chevron rule. They better not get caught. Following closer than two chevrons carries a penalty of 10 years hard labor in a salt mine. Just joking; I think. 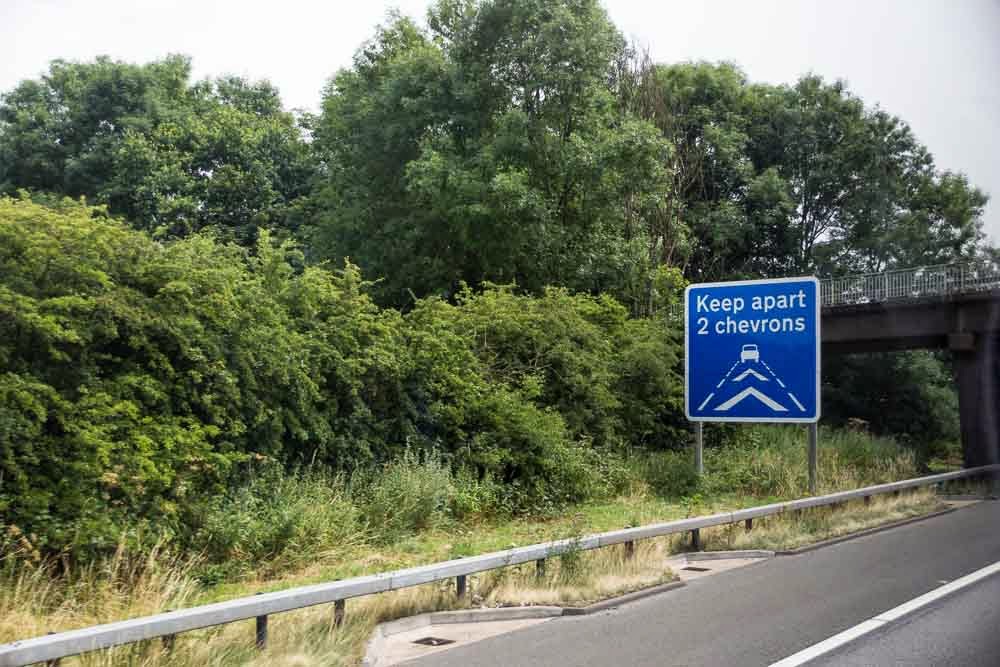 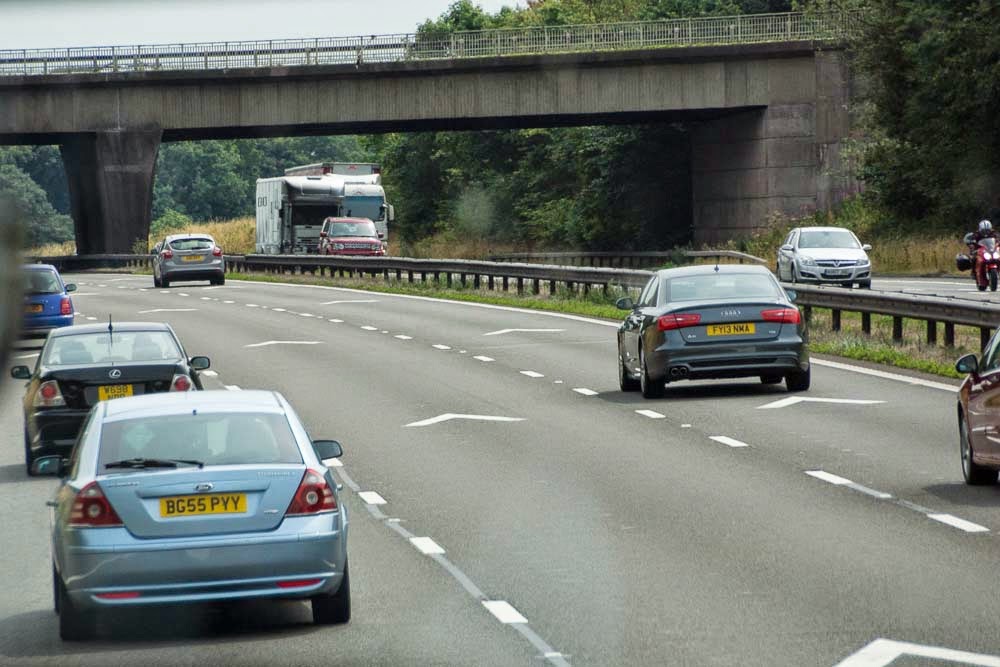 In towns with buildings on most corners, the names of the streets were often posted on the side of the buildings. It’s a bit disconcerting if you are not used to it, but quite cost effective. No post is required. 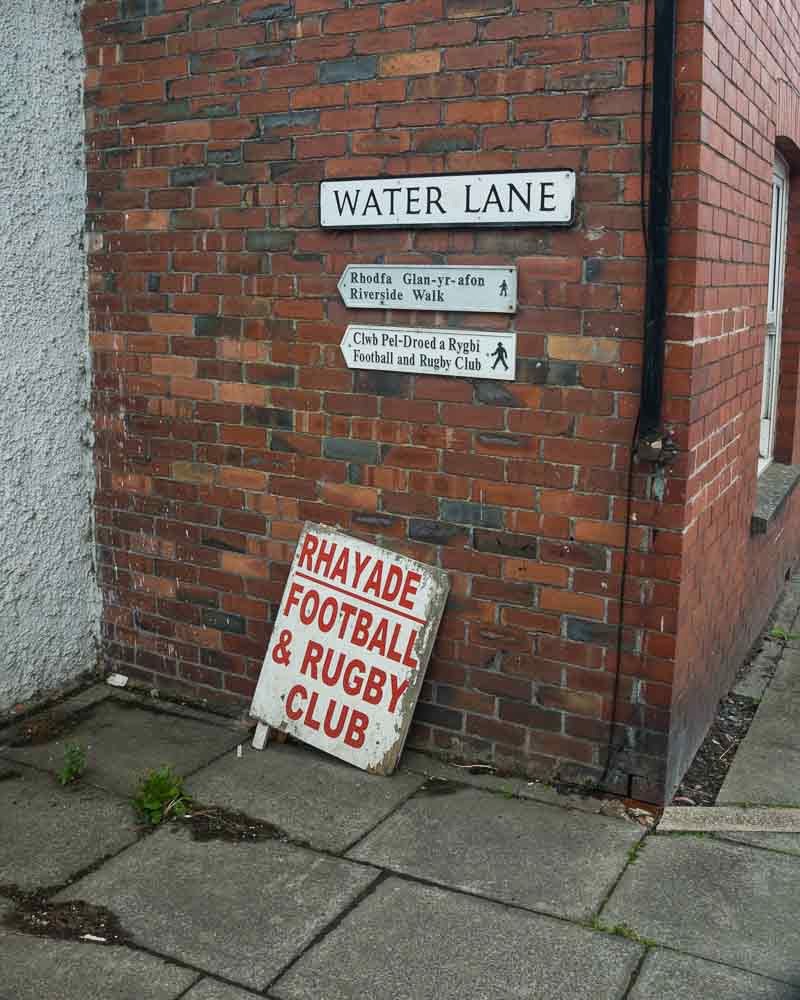 In towns and cities it is common to see signs such as the one below showing a great amount of detail about what is where and in which direction. 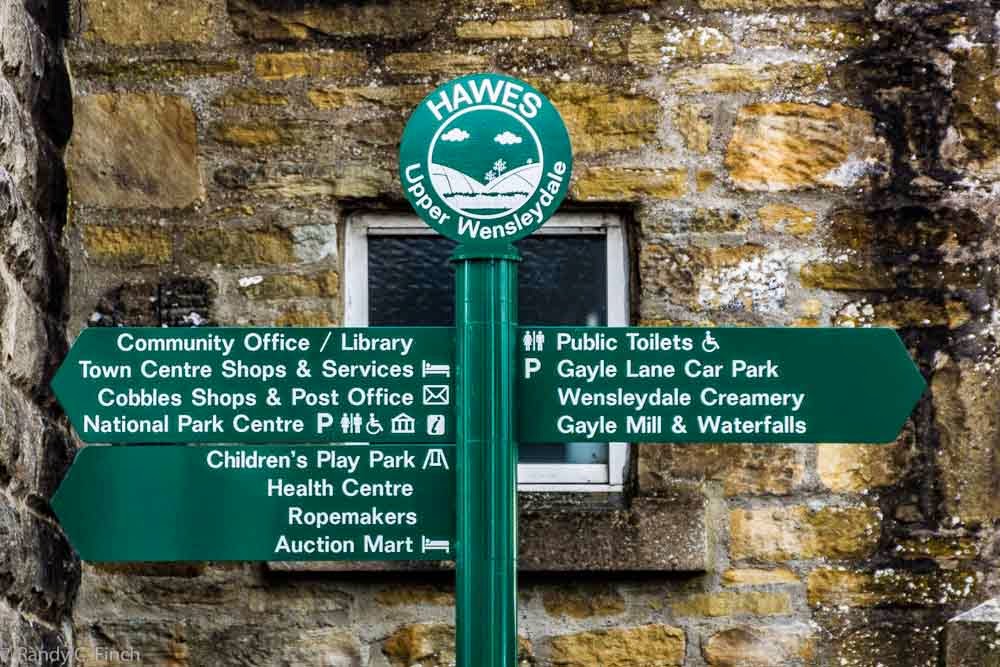 Finally, I’d like to mention the use of bilingual signs in Britain. Since English is the main language of England, the signs there are monolingual. However, in Scotland there are a significant number of people who speak Scottish Gaelic. This language is more common in the northern parts of Scotland as you distance yourself from England. The same is true in Wales. Welsh is spoken by a significant number of citizens, this being more common in the north than the south. Here’s a sign welcoming visitors to Fort William, Scotland. Notice the Scottish Gaelic at the top of the sign. 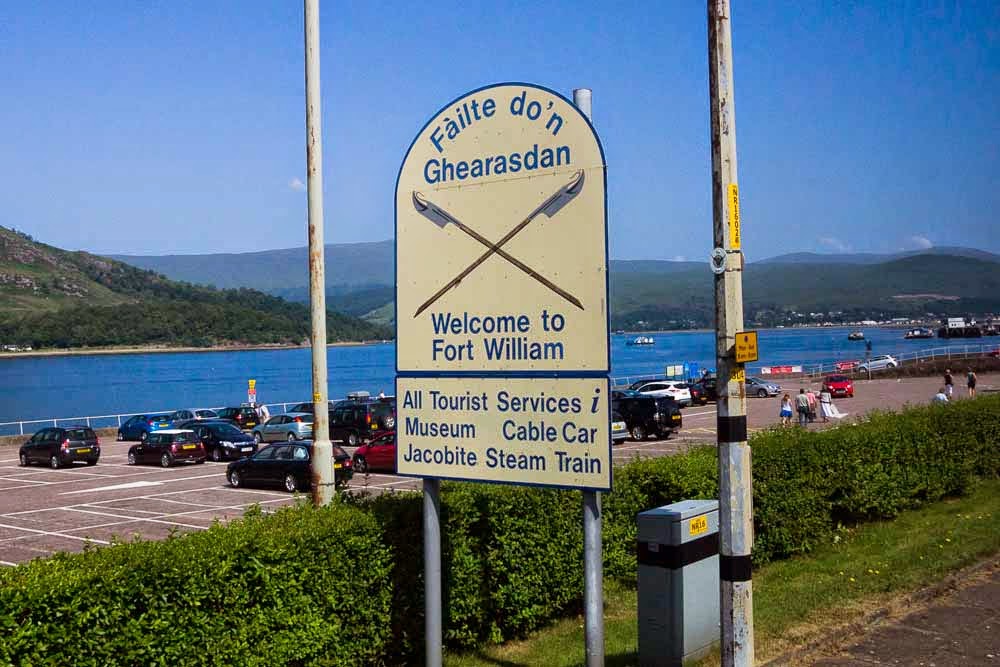 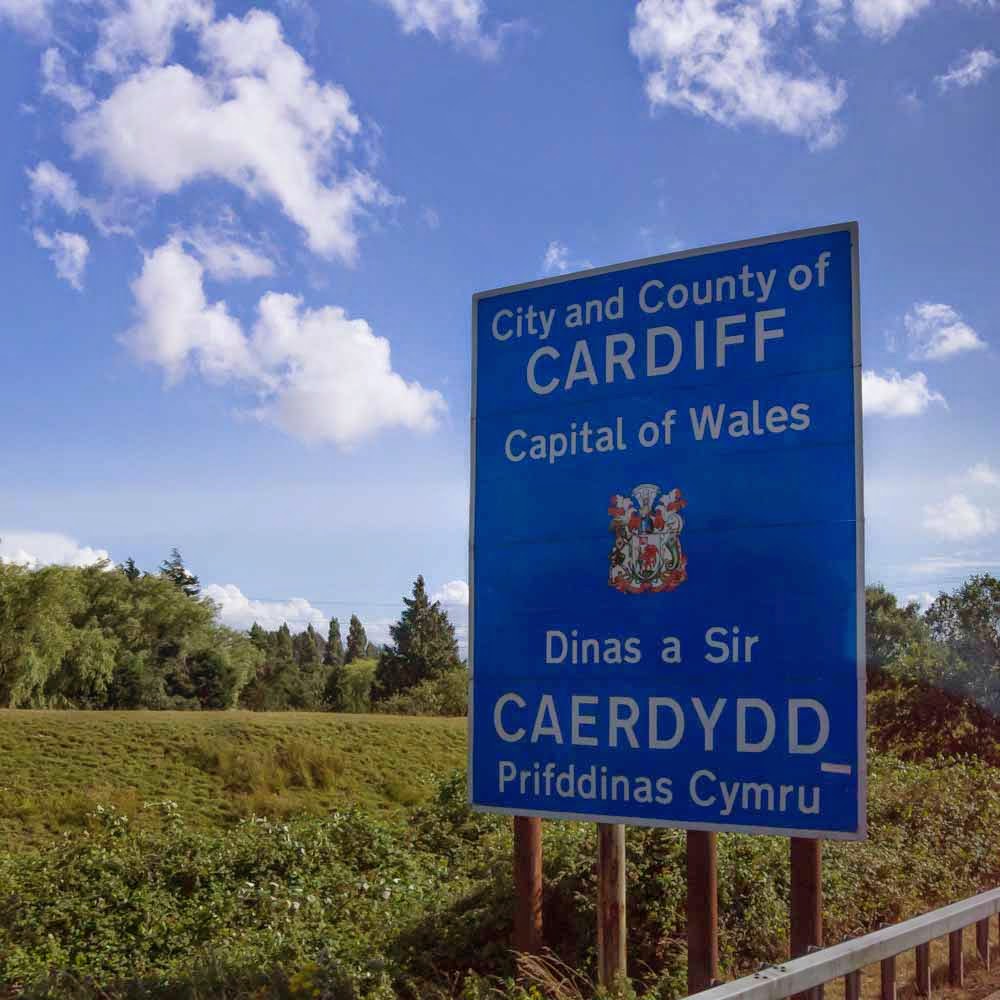 Compare that to these photos taken further north in Wales. 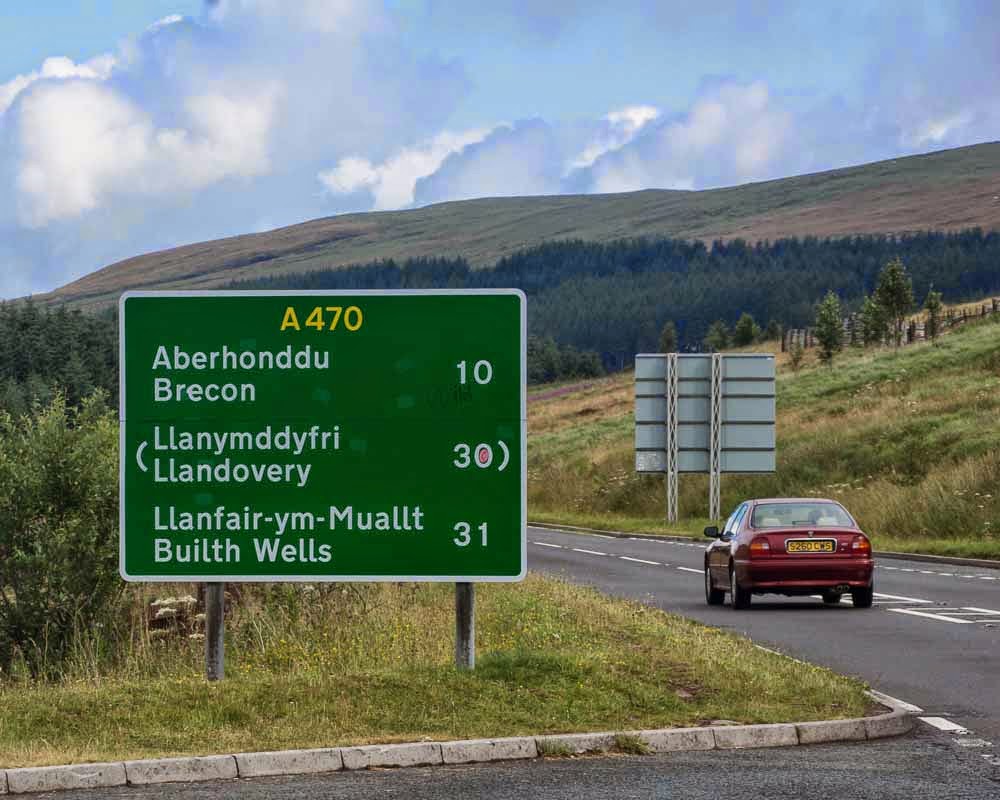 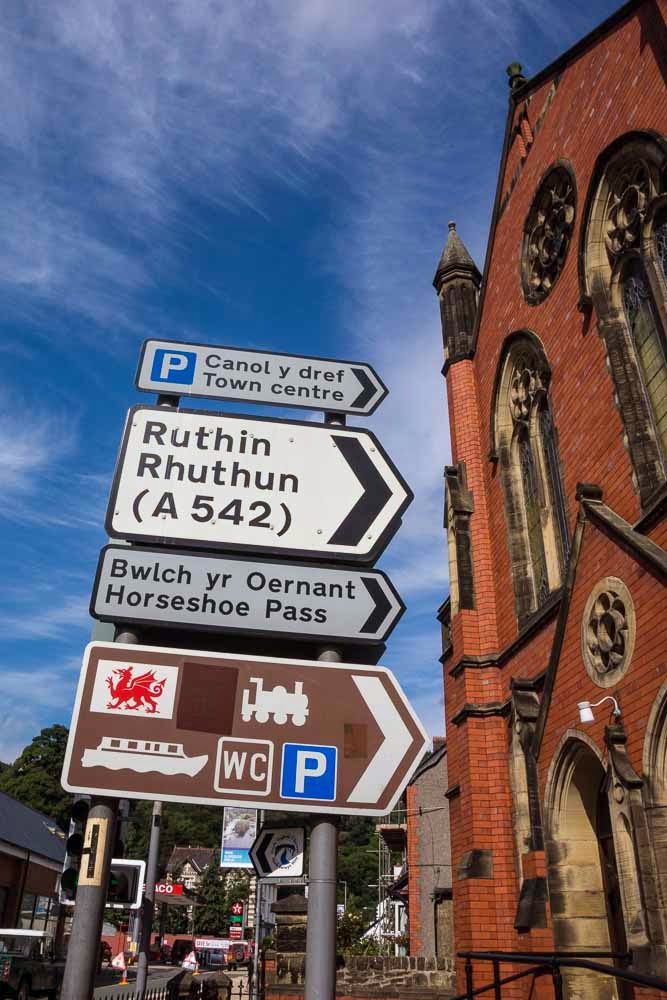 I originally thought, “How different it is to live in a place needing bilingual signs.” Then I realized that the US is becoming more and more bilingual, with Spanish on the rise. For instance, here is a Wet Floor sign I saw at our local YMCA. I’m sure the bilingual signs are even more common in the parts of the US bordering Mexico. 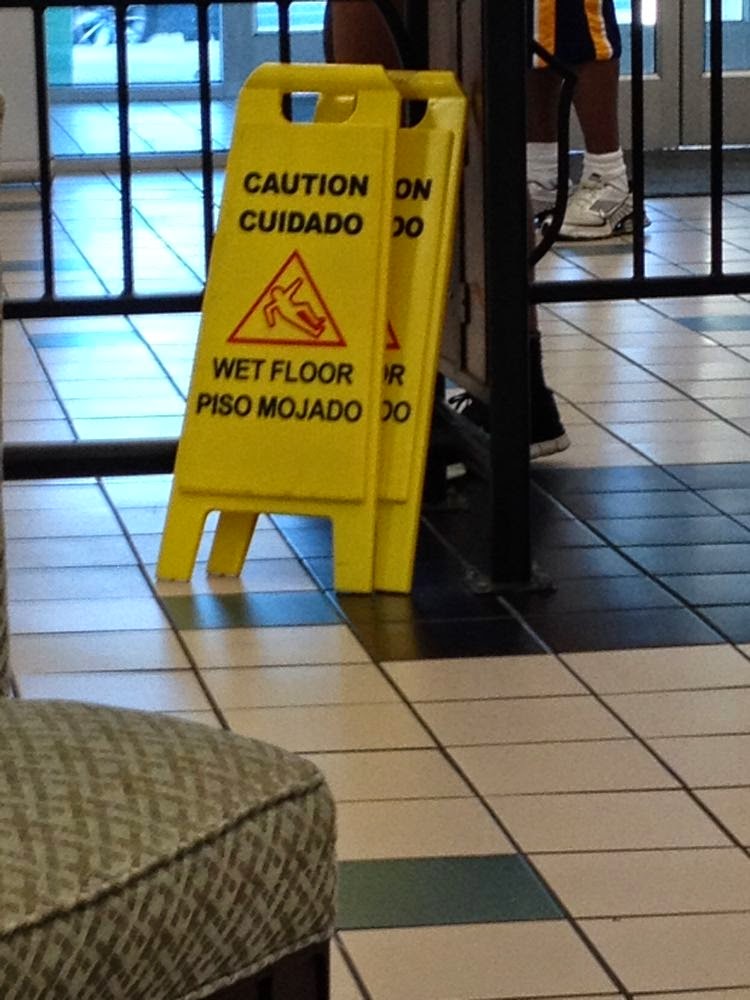 It was my first time shooting clays. I hit the first five in a row. Then the instructor told me what I was doing wrong.

Last week my wife, Kathy, and I took an early anniversary trip to the Biltmore Estate in Asheville, NC. We stayed four nights at the Inn on Biltmore Estate and planned several activities while there. One of those activities was taking our first shooting clays lesson. We had shot pistols, rifles, and shotguns before, but only at stationary targets. Now it was time for moving targets.

The cost of the lesson included the use of a shotgun and the ammo as well as a vest, earplugs, and safety glasses. Things got off to a bad start when the instructor informed us that our glasses weren’t sufficiently safe, and he didn’t have any safety glasses that would fit over our regular glasses. So, our instructor asked us to shoot without vision correction. That would be all well and good if we were farsighted. But we are both nearsighted. However, the safety glasses had a yellow tint, which helped a bit, but things were still blurry.

The instructor led us upon a wooden stand from which we were to shoot. He stepped us through how the shotgun operated and how to properly position and hold the gun. Next he showed us how the clays would fire. There were five electric clay target throwers. One threw left to right; one right to left; one from under us outward; one from a distance to our right at a 45 degree angle towards us; and one from a distance directly towards us. The last one was the easiest since the clay target would be rising above the tree line almost straight up with no lateral motion. It was the one we would start with.

I was up first with five rounds of ammo. I positioned the gun as I had been instructed and said, “Pull.” The clay target began rising above the tree line. I began tracking it by lifting the shotgun. Then I pulled the trigger.

Kathy yells out, “You got it!”

The instructor assured me that was okay. 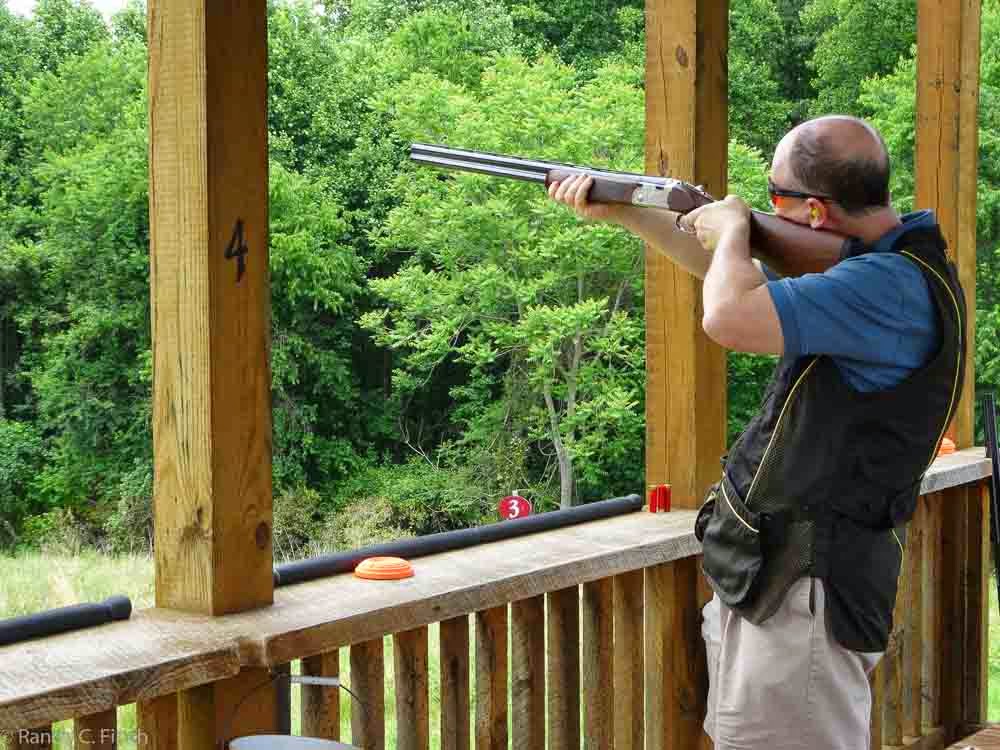 I ejected the expended shell and reloaded the gun. I positioned it. I said, “Pull.” The next clay target rose above the tree line. I followed. I pulled the trigger. I tore the clay wings off that clay pigeon. I repeated this three more times, blasting the clay to pieces. I was quite excited.

The instructor told Kathy it was her turn, and there was no pressure just because I hit all five. Kathy missed a few initially, but then began to hit them. After she finished, the instructor asked us to describe what we had done. 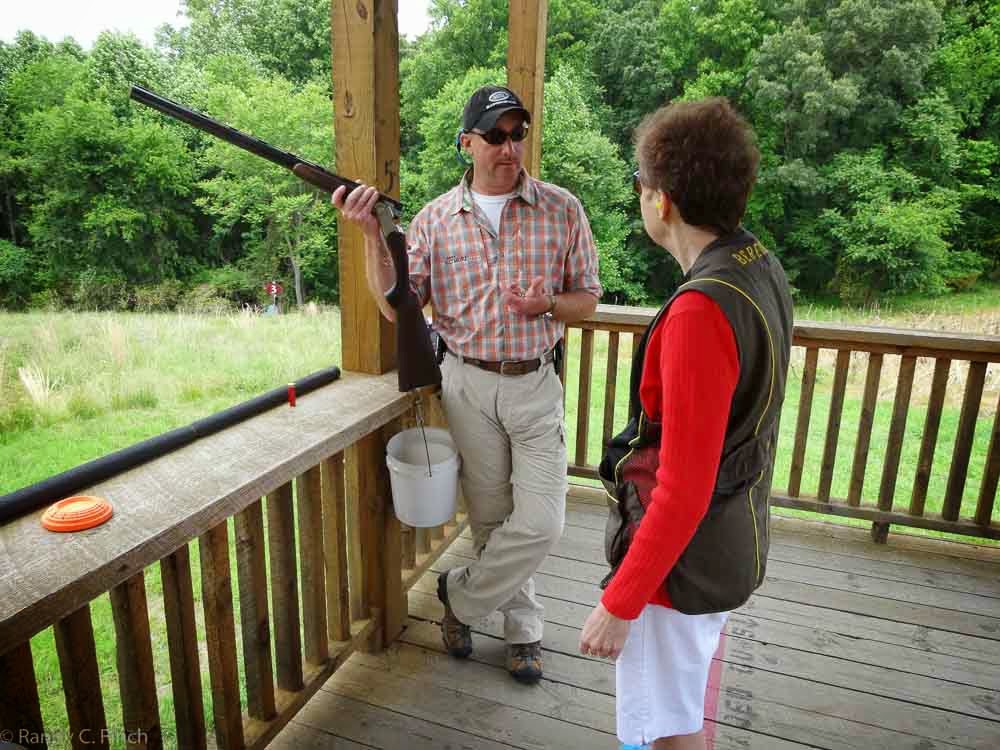 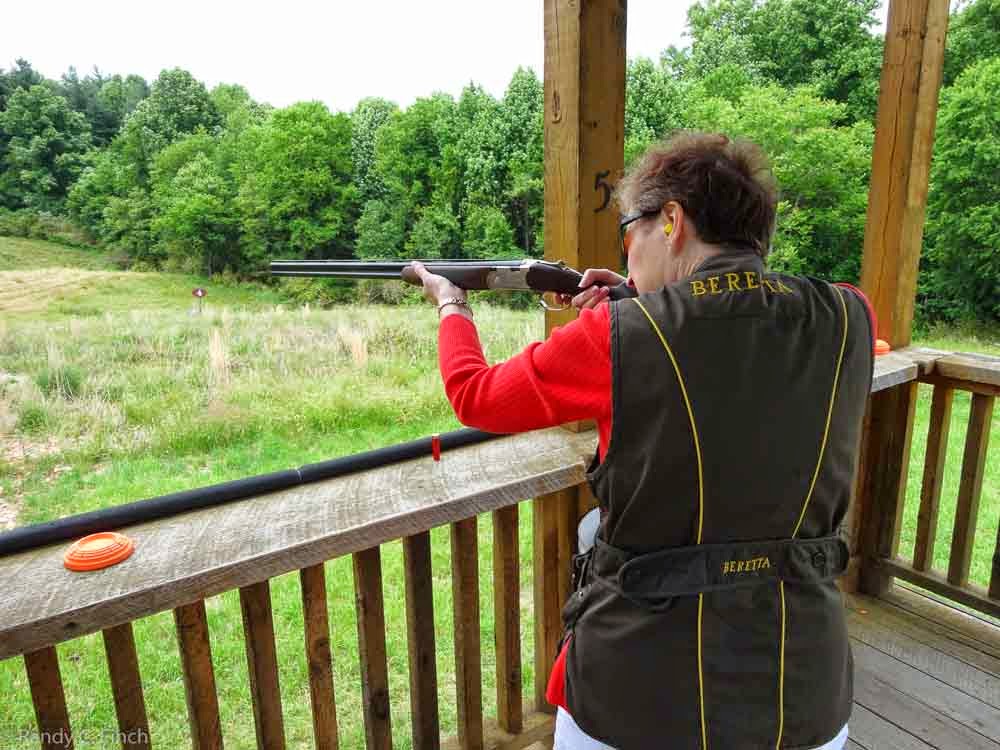 I said, “Well, since the clay target was moving straight up, I followed it until it reached its peak, where it was essentially stationary, then pulled the trigger. I figured I would have a better chance of hitting it at that point.”

The instructor said, “That’s fine. There’s nothing wrong with that technique. But it’s not the best technique. Do you know why?”

I replied, “Because it will only work for that particular thrower. It won’t work when the clay is moving laterally.”

For several minutes the instructor explained why shooting clays required a different technique than did stationary target shooting. With the latter, you normally alternate between looking at the gun sights and the target. You can’t do that with clay shooting because you need to be concentrating on the clay target rather than the gun. It’s more like hitting a baseball with a bat or a tennis ball with a racket. You don’t look at the bat or racket at all. You just follow the ball movement and let your natural hand-eye coordination do the rest. Much more was said about the psychology of clay shooting, but I won’t go into the details.

I was up again. Using my new found knowledge, I positioned the gun, said “Pull”, followed the clay target into the air, pulled the trigger and MISSED. Had the instructor misled me? I tried again and missed again. The instructor asked me to point to the finger he had placed under his eye with each hand in turn. He said, “You’re left eye dominant. Would you do me a favor and shoot left-handed?”

So, there I was, a right-handed person, shooting a gun without glasses at blurry clay pigeons left-handed. This was not what I had anticipated when I signed up for this class. So, again, I positioned the gun, this time on my left shoulder. I said, “Pull.” I followed the clay into the air, pulled the trigger, and spread clay feathers all over the landscape. I repeated this and hit again. Yes, I had a few misses along the way, but by and large did quite well. Kathy did fairly well also.

Near the end of the lesson the instructor let us choose which throwers to use. I just had to try the one that threw the clay target from right to left. I shattered it.

All in all, Kathy and I really enjoyed our shooting clay lesson. It made us want to buy shotguns and join a sporting clays club. Someday we may.