Britain From A to Z: R

Yes, that’s right. I’m going to talk about the restrooms we encountered while in Britain. And I will do so proudly. The first thing you have to know is that restrooms are not typically called restrooms in Britain. The natives understand what you are talking about if you call them that, but typically restrooms are called toilets. And that’s what’s on the signs for them, also. 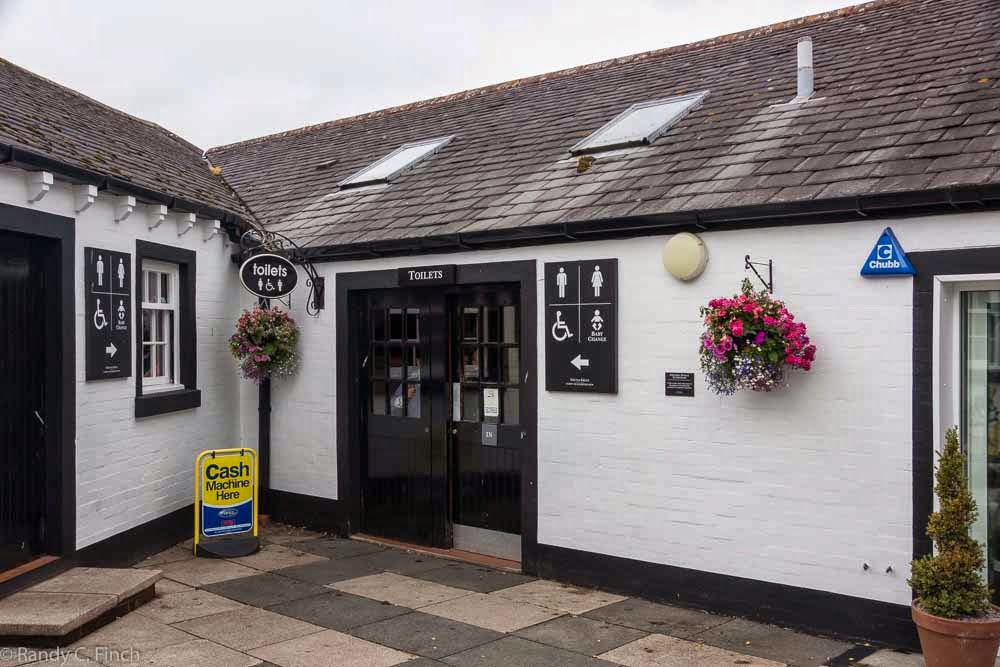 Public toilets were mostly like the restrooms we have in the US. One thing I noticed, however, is that you are more likely to encounter a low volume flush toilet in Britain than you are here in the states. That will most likely change in the future as our government sticks its nose more deeply into our toilets and their regulations. I don’t know about you, but I believe this stinks. Leave the toilets for us citizens to stick our own noses into.

Not all toilets were low volume flush. Occasionally we visited older restrooms using older technology. In fact, in one location (I believe it was near the Bronte Parsonage in Haworth, England), I used a toilet that had the reservoir high on the wall. It used a pull chain for flushing. I believe this was a holdover from the days of the Roman occupation.

Public Toilets at a Restaurant in England 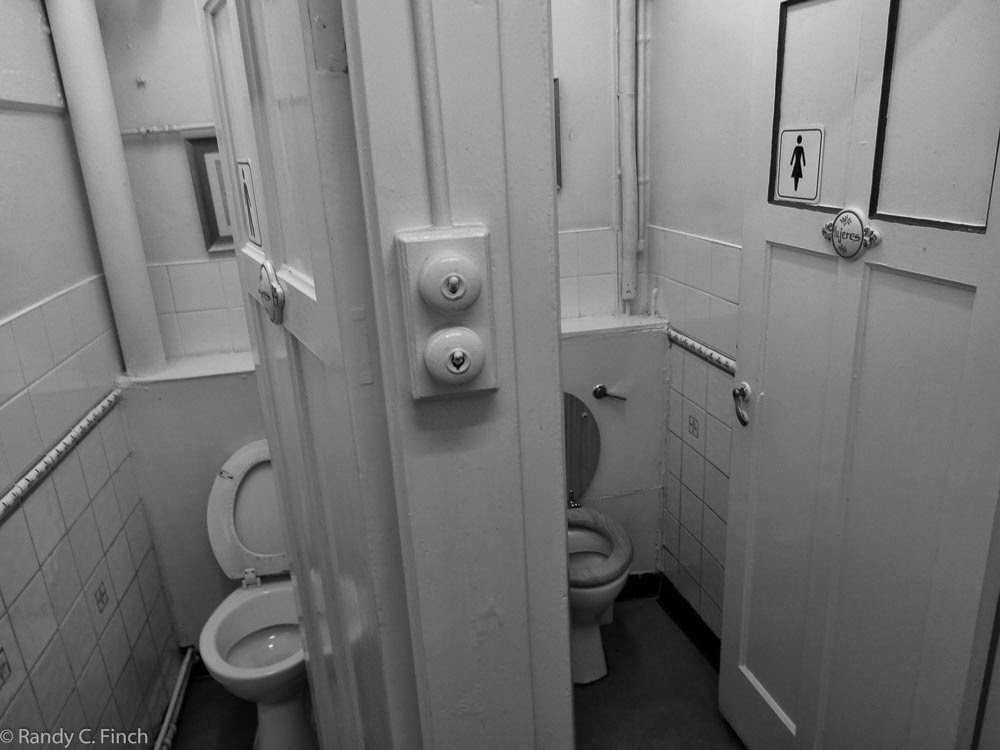 The bathrooms at the hotels were quite varied. In one older hotel the shower had a circular curtain to pull around you. I had only seen these in movies made before I was born. In several of the more modern hotels the shower/tub had a fixed glass wall that only covered about half the length of the tub. Thus, you couldn’t prevent water from splattering outside the shower as it ricocheted off your body. I don’t know for sure, but I wouldn’t doubt these half length glass walls were due to some type of government regulation. After all, why would the hotel want you to splash water all over the toilet and floor?

Half Wall on Shower/Tub in Stratford-Upon-Avon, England 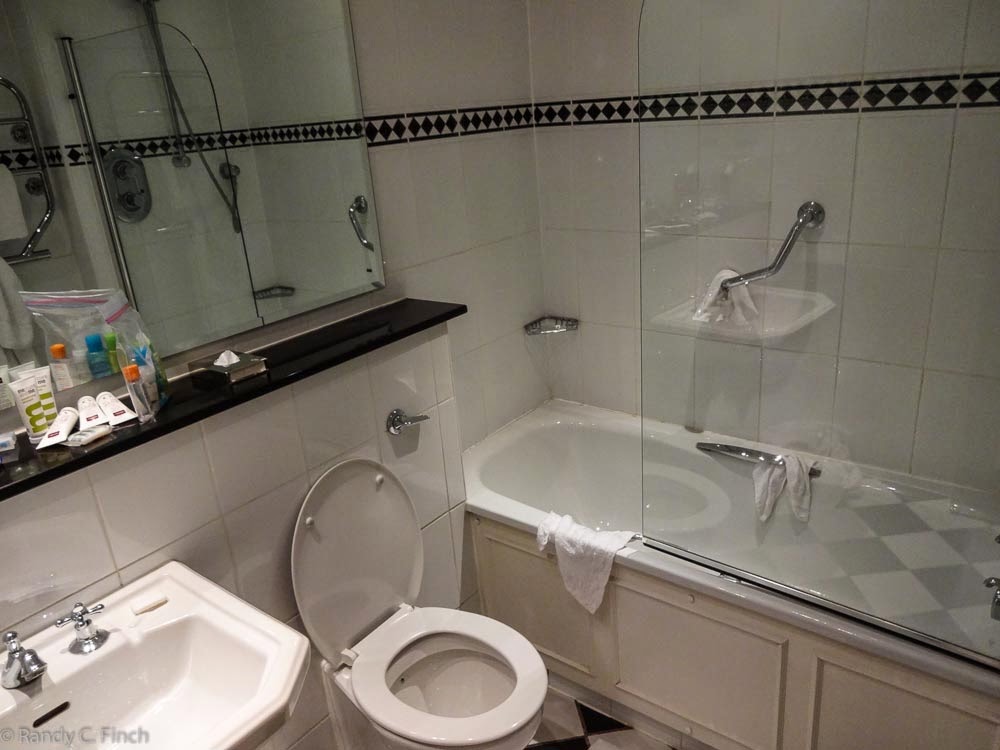 The most interesting bathroom was at a hotel in Windsor. It had a totally open shower with no walls at all. Water splattered everywhere while showering, and then mostly ran to the drain at a low point in the floor. Lest you think “How stupid is that?”, let me inform you that we were in a handicapped room. Makes a bit more sense now, doesn’t it?

Bathroom With No Shower Wall in Windsor, England 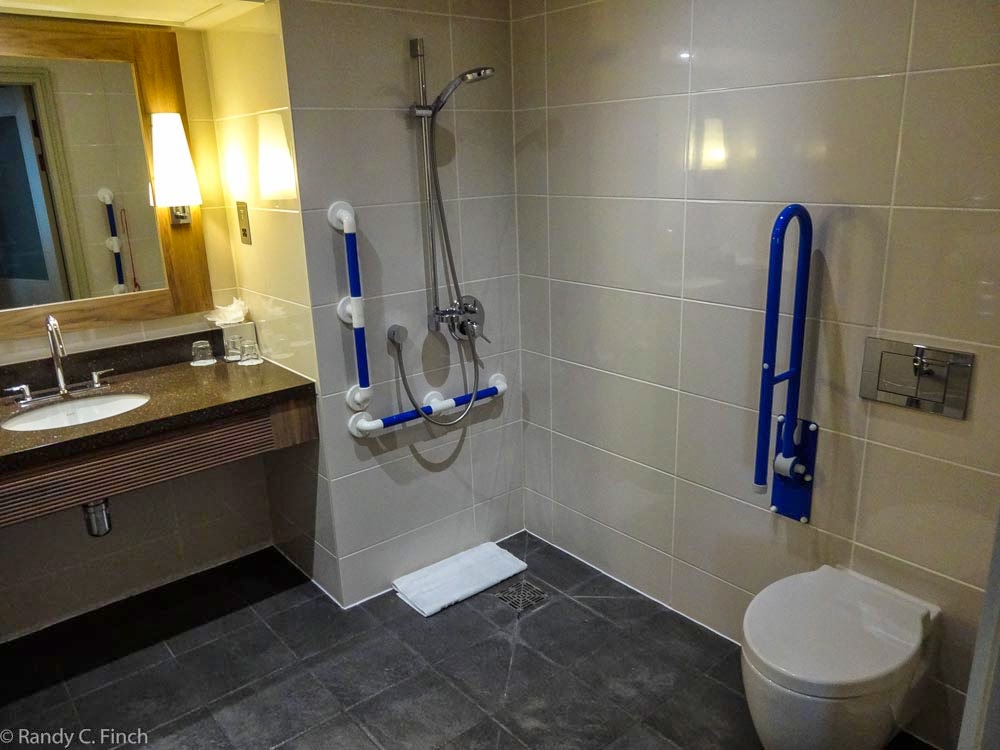 I now give you an assignment. The next time you travel, pay attention to the restrooms, bathrooms, or toilets. You just might find something interesting, especially if the previous occupant failed to flush.
Posted by Randy C. Finch at 9:02 PM No comments: