Britain From A to Z: N


Several days into our tour, I realized that I had not seen any Mexican restaurants. I thought perhaps that was just a Scotland thing, but later realized it was not. In fact, I do not recall seeing one single Mexican restaurant on the entire UK trip. However, I know for a fact that at least one exists, because our tour guide said he ate at one one evening. I don’t recall where we were at the time, but it was probably in a bigger city. A lack of Mexican restaurants wouldn’t sit well with me since I love Mexican food.

We did see a number of American restaurants in the UK, particularly fast food chains such as McDonald’s, KFC, and others. I guess seeing a McDonald’s in Scotland is no surprise since McDonald is a Scottish name. I’m not quite sure what the origins of the name KFC are, but it could be Welsh. And like most Welsh words, I definitely don’t know how to pronounce it. 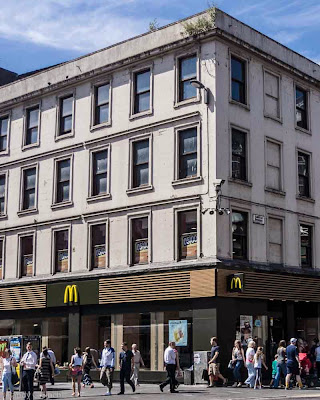 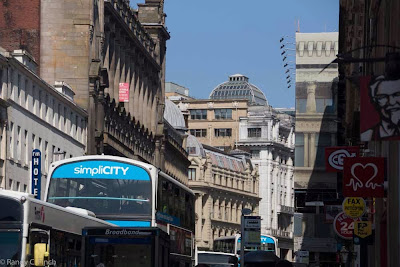 I wanted to do a cost comparison of the food in the UK with that in the US. It really wasn’t feasible to do this in independent restaurants as prices can vary greatly across these types of restaurants throughout just the US. So, I had to do my comparison at American restaurants. It turns out that the number of pounds a meal costs at McDonald’s in London is about the same number of dollars it would cost here in my hometown. Given that the exchange rate was about 1.5 dollars per pound when we were there, the cost of food was about 1.5 times more expensive. Of course, I’m sure that varies quite a bit in different locations. Since I kept up with how much I spent in the UK, I was able to figure up the average cost of our meals. It was about $13 per person per meal including tip. Keep in mind that most of these meals were lunches since most of our dinners were included in the cost of the tour. That’s about 1.5 times what I typically spend on a lunch meal here at home, so it matches my McDonald’s calculation.

Expectedly, there are quite a few pubs and unique restaurants throughout the UK. Tea rooms are quite common also. Interestingly, we were told that while tipping was standard procedure in restaurants, it was not in pubs. However, that was not a hard and fast rule. Since we couldn’t really tell where it was okay to not tip, we usually ended up tipping everywhere.

Kathy at a Tea Room in Rhayader, Wales 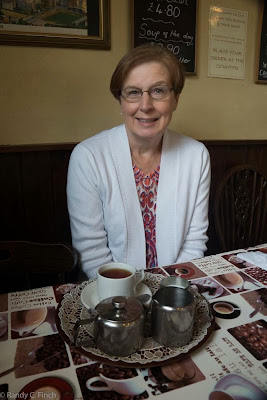 One last thing. It is fairly common for mid-range restaurants in America to have steaks on their menus. Here in the south, a 6-ounce sirloin with sides will usually cost about $8.00 to $11.00. Steak on menus in the UK was rare. And when it did appear, it was typically some type of chopped steak rather than a particular cut. I’m sure real steaks exist at the pricier restaurants, but sometimes I just want a cheap sirloin.